El Menia is a province about 250 km southern from Cairo. Beni Hassan is an area named by the old Arab tribe, on the eastern bank of Nile, which has many tombs from the Old kingdom and the Middle kingdom. Vivid colors marked on the walls 17th century BC. without having any restorations will make the trip unforgettable for our customers. Also, our guests will have a fantastic view from above the hill, where these tombs are.

What we call Amarna, or el-Amarna today was the city of Akhetaten (The Horizon of the Aten). It was created by Egypt's heretic king, Akhenaten for his revolutionary religion that worshiped Aten during the Amarna Period.El amarnah is an excursion in which the visitor will contemplate the ruins of the place of 18th dynasty as well as tombs of his nobility that show a close study of art of the period and how it had been affected by religious beliefs. Tombs were cut inside the rocks near mountains. A bus or a jeep makes this visit possible.

Tombs of Greek-roman era used to be the necropolis of the province in ancient Egypt, called by the Greeks Hermopolis magna. This necropolis would be a good example for seeing this strange mixture between ancient Egyptian and Greek arts. Customers will visit tombs of Petosiris, the mummy of Isadora or ibis birds – tombs. 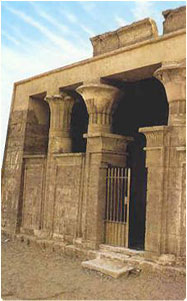