The second largest city in Egypt, Alexandria, known as "The Pearl of the Mediterranean", has an atmosphere that is more Mediterranean than Middle Eastern; its ambience and cultural heritage distance it from the rest of the country although it is actually only 225 km from Cairo. Founded by Alexander the Great in 331 BC, Alexandria became the capital of Graeco-Roman Egypt, its status as a beacon of culture symbolized by Pharos, the legendary lighthouse was one of the Seven Wonders of the World. In 19th century Alexandria took a new role, as a focus for Egypt's commercial and maritime expansion. This Alexandria has been immortalized by writers such as E.M.Forster and Cavafy.
Generations of immigrants from Greece, Italy and the Levant settled here and made the city synonymous with commerce, cosmopolitanism and bohemian culture. Alexandria is a city to explore at random. It's as important to enjoy the atmosphere as it is to see the sights. 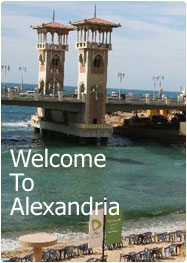